6 Awesome Arm Exercises You Can Do Without Weights 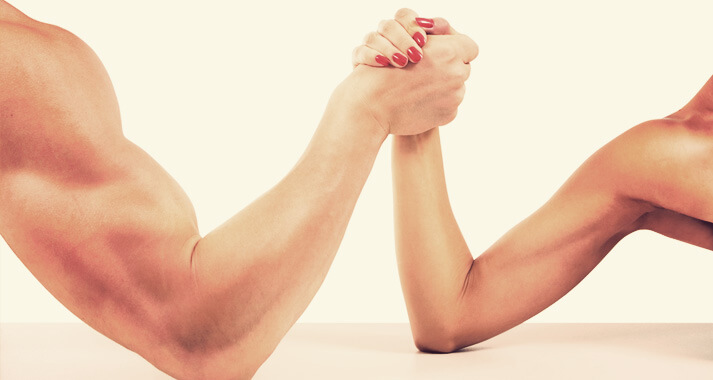 Exclusive Download: Target your biceps and triceps at home (without weights) with your FREE workout, featuring all 6 of the exercises in this article.

Arms, like abs, are at the forefront of most people’s minds because they look impressive.

They’re not something that people are just born with – it’s obvious that you had to put in the work to get them. Unlike calves (the size of which are largely determined by genetics), arms are most often the result of serious time under the iron.

Gym-owners know this, and thus most gyms are packed wall-to-wall with equipment specifically designed to work your arms. While not all of it is useful, getting results is simply a question of putting in the work and following a smart plan like this one.

But if you’re travelling, working out at home or elsewhere, it’s a bit trickier. You still need to do the work, but you also need a way of training your arms without weights.

Fortunately for us, there are a number of arm exercises that you can do just about anywhere. These mainly involve using your bodyweight, but it’s also useful to have access to a TRX or resistance bands.

Before we get to the exercises, it’s worth taking a moment to look at the anatomy of the arms so we can understand what makes them look the way that they do.

The Anatomy of The Arms 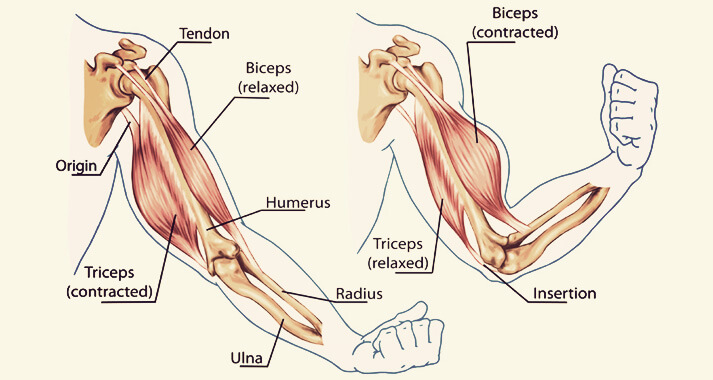 Forgetting about the forearms for the time being (which we’ll take a look at in another article), the main muscles of the arm are the triceps and biceps.

These are the muscles that we need to focus on training if you want to improve the look and strength of your arms.

It’s worth restating here that using light weights and doing countless reps (15+) isn’t going to cut it; this goes for men and women.

To force the muscles to grow (which is what gives them shape and definition/makes them look ‘toned’) you need to overload them with exercises that you can ideally perform for sets of 6-12 reps.

It’s not uncommon for people to prioritize training one of these muscles over the other based on a particular goal, but it’s crucial that both are trained equally to achieve a balanced look and avoid injuries.

The triceps are found on the back of the arm, and are often neglected by men in particular who would rather train the muscle that they can see – their biceps (curls get the girls etc).

But it’s worth paying particular attention to the triceps because they are a bigger muscle group than the biceps. If you want bigger arms it follows that you need to place added emphasis on training them.

Training the triceps isn’t just important for men, though. Women are genetically predisposed to storing more fat than men, and in different places. Whereas a man typically stores fat on the upper body (resulting in beer bellies), women tend to store it on their thighs and arms.

The most effective way of losing fat, and thus getting rid of ‘turkey/bingo’ wings is through diet. But it is also crucial to strengthen the muscle underneath – the triceps – to give the arms shape and definition.

Although the biceps are relatively small muscles, that doesn’t mean that they should be paid any less attention (not that anybody is guilty of that!)

Located at the front of the arm, biceps are perhaps the muscle most commonly associated with strength – just ask any child to make a muscle and he or she will strike a biceps pose.

Not only are they good for looking at, but they have practical uses too. A strong set of biceps will help you with any pulling exercises that strengthen your back. In turn, this will help to improve posture and reduce the chances of any pain or injuries that may otherwise occur.

Don’t miss out: Download the FREE workout arms workout you can do at home (or anywhere else). Best part? It only takes 30 minutes (max).

The great thing about tricep (and chest) exercises is that they can truly be done anywhere – you really don’t need any equipment, other than a floor and a wall. Here are 3 of the best:

Diamond push-ups are far from easy, but done correctly they’re one of the best tricep exercises you can do.

To perform a regular push-up you would position your hands roughly shoulder-width apart, involving both the chest and triceps. By placing your hands together and keeping your elbows close to your body to do a diamond push-up, the emphasis is placed upon your triceps as opposed to your chest.

Here’s how it should be done:

Regressions (if it’s too difficult):

Progressions (if it’s too easy):

Dips are another great exercise that work the triceps and chest to varying degrees depending on the variation you choose.

For most people, bench dips make a good starting point, but your goal should be to work your way towards the parallel bar dip as this variation involves more musculature.

The only drawback of the parallel bar dip is that you will need to find somewhere suitable to do it. Playgrounds quite often have parallel bars of some description, but failing that you could use the corner of a worktop or even the backs of two sturdy chairs.

Here’s how to perform a bench dip as per the video above:

Compound exercises, such as the push-up and dip, are great because they work multiple muscles at once.

But single-joint, or isolation, exercises also have their place in a well-rounded routine to train one specific muscle while working on any weaknesses or imbalances.

In the video above Ben Bruno demonstrates the bodyweight triceps extension – which isolates the triceps – using a TRX and weighted vest (because he’s a beast), but you can use a wall or any other surface instead.

Bonus Download: Want a FREE biceps (and triceps) workout you can do at home without equipment? You got it. Get instant access here.

Unfortunately, you’re going to need some equipment to give your arms a complete workout by training your biceps (the same goes for your back).

At the very least you will need a stable overhead surface from which to hang and a horizontal edge such as a table. You can usually find both of these things in a playground.

Once you’ve got that sorted, these are my top 3 bodyweight bicep exercises to try:

The chin-up is one of my favorite exercises, second only to the deadlift.

Like the pull-up (palms facing away from you), chin-ups are a great exercise for your back, but due to the difference in grip (palms facing each other or towards you) there is added emphasis on the biceps.

I’ve always believed that chin-ups are better for developing the biceps than curls because of the amount of weight involved (your entire bodyweight vs the weight of a dumbbell/barbell), and the range of motion your arms are traveling through. This view is supported by research from Bret Contreras that he carried out as part of his his ‘Inside The Muscles’ series.

It’s another exercise that beginners will find difficult so some modifications are listed below, but if you feel ready to give it a go here are a few pointers on form:

Even when I’m in the gym, the inverted row is my back exercise of choice.

You’ve probably heard of the regular barbell row. You pick up a barbell, bend over at the waist, and pull the weight up towards your chest. It’s a good exercise when it’s done properly, but when the weight gets heavy it gets extremely difficult to maintain good form.

The inverted row solves that problem.

It’s a difficult exercise to screw up, which means that you can progressively make it more difficult without simultaneously increasing the risk of injury.

Not only does it work the back, but it’s also a great exercise for the biceps (hence it being included here) and the core.

Check out the video above of Steve Kamb demonstrating the exercise, and keep the following in mind:

For the final biceps exercise in this list, you will need either a TRX or set of resistance bands.

Similarly to the triceps extension, this is more of an isolation exercise that is a great way to finish off training the biceps. But to be completely honest you probably won’t need to worry too much about these if you’re regularly performing chin-ups and inverted rows.

Using the exercises above, I’ve put together together a bodyweight arm workout that you can do just about anywhere.

This would work well as an ‘upper-body day’ as part of a well-rounded program (I don’t recommend training your arms exclusively, as tempting as that may be!)

I’ve ‘supersetted’ triceps exercises with biceps exercises to make this workout as time-efficient as possible; it shouldn’t take longer than 30 mins start to finish.

A superset is a pairing of exercises whereby one set of an exercise is performed and then a set of another exercise immediately after. The setup works because it allows one muscle to recover while the other is being trained.

The order in which the supersets should be performed are indicated by a number, and the pairing by a letter. So in this workout, for example, the first superset involves chin-ups (1A) and diamond push-ups (1B). You perform one set of chin-ups, and then a set of push-ups straight after.

When you can perform a given exercise for the prescribed number of sets and reps, switch to one of the more challenging variations.

Featured Download: Click here to get the FREE arms workout you can do without weights, featuring all 6 of the exercises in this article.

How long have you been working on your arms? Let me know what has or hasn’t worked for you below!